5 Factors That Influence The Precision of Plasma Cuts

5 Factors That Influence The Precision of Plasma Cuts

There are five important factors that influence the precision of plasma cuts, let us start learning the factors to get better plasma cuts with your plasma cutter, including working gas, cutting speed, cutting current, nozzle height, and arc power. 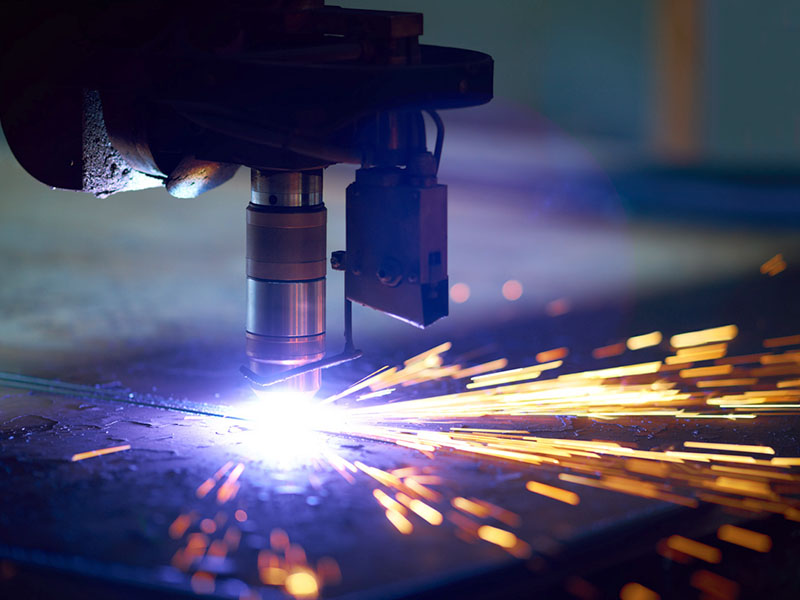 The working gas and flow rate are the main parameter that affects the cutting quality. At present, the general use of air plasma cutting is only one of many working gases. It is widely used because of the relatively low cost of use. The effect is indeed lacking. The working gas includes gas and auxiliary gas. Some equipment also requires arc starting gas. Usually, the appropriate work is selected according to the type of cutting material, thickness and cutting method. gas. The gas must not only ensure the formation of the plasma jet, but also ensure that the molten metal and oxide in the cut are removed. Excessive gas flow will take away more arc heat, making the length of the jet shorter, resulting in reduced cutting capacity and arc instability; too small gas flow will cause the plasma arc to lose its straightness and cut. The depth becomes shallower, and it is also easy to produce slag; therefore, the gas flow must be well matched with the cutting current and speed. The current plasma cutting machines mostly rely on gas pressure to control the flow rate, because when the torch aperture is fixed, the gas pressure also controls the flow rate. The gas pressure used to cut a certain thickness of material is usually selected according to the data provided by the customer. If there are other special applications, the gas pressure needs to be determined by the actual cutting test.

A. The air contains about 78% of nitrogen by volume, so the slag formed by air cutting is very similar to that when cutting with nitrogen; the air also contains about 21% of oxygen by volume. Because of the presence of oxygen, the air is used for cutting The speed of low-carbon steel materials is also very high; CNC plasma cutting machine at the same time air is also the most economical working gas. However, when using air cutting alone, there will be problems such as slag hang, cut oxidation, nitrogen increase, etc., and the lower life of the electrode and nozzle will also affect the work efficiency and cutting cost.

B. Oxygen can increase the speed of cutting mild steel materials. When using oxygen for cutting, the cutting mode is very similar to flame cutting. The high-temperature and high-energy plasma arc makes the cutting speed faster, but it must be used with an electrode that resists high-temperature oxidation, and at the same time, the electrode is protected against impact during arcing to extend the electrode Life.

C. Hydrogen is usually used as an auxiliary gas to mix with other gases. For example, the well-known gas H35 (hydrogen volume fraction is 35%, the rest is argon) is one of the gases with the strongest plasma arc cutting ability, which mainly benefits from hydrogen. Because hydrogen can significantly increase the arc voltage, the hydrogen plasma jet has a high enthalpy value. When mixed with argon, its plasma jet cutting ability is greatly improved. Generally, for metal materials with a thickness of more than 70mm, argon + hydrogen is commonly used as the cutting gas. If a water jet is used to further compress the argon + hydrogen plasma arc, a higher cutting efficiency can also be obtained.

D. Nitrogen is a commonly used working gas. Under the condition of higher power supply voltage, nitrogen plasma arc has better stability and higher jet energy than argon, even when cutting liquid metal with high viscosity materials such as stainless steel and In the case of nickel-based alloys, the amount of dross at the lower edge of the cut is also small. Nitrogen can be used alone or mixed with other gases. For example, nitrogen or air are often used as working gases during automatic cutting. These two gases have become the standard gas for high-speed cutting of carbon steel. Sometimes nitrogen is also used as the starting gas for oxygen plasma arc cutting.

E. Argon gas hardly reacts with any metal at high temperature, and the argon plasma arc is very stable. Moreover, the nozzles and electrodes used have a long service life. However, the voltage of argon plasma arc is low, the enthalpy value is not high, and the cutting ability is limited. Compared with air cutting, the thickness of the cutting will be reduced by about 25%. In addition, in the argon gas protection environment, the surface tension of the molten metal is relatively large, which is about 30% higher than that in the nitrogen environment, so there will be more slag hang problems. Even cutting with a mixture of argon and other gases will have a tendency to stick to the slag. Therefore, it is now rare to use pure argon alone for plasma cutting.

In addition to the influence of working gas on cutting quality, the effect of cutting speed on the processing quality of CNC plasma cutting machine is also very important. Cutting speed: The optimal cutting speed range can be selected according to the equipment description or determined by experiment. Due to the thickness of the material, the different materials, the melting point, the thermal conductivity and the surface tension after melting, the cutting speed is also corresponding. Variety. main performance:

A. A moderate increase in cutting speed can improve the quality of the cut, that is, the cut is slightly narrower, the cut surface is smoother, and deformation can be reduced.

B. The cutting speed is too fast so that the linear energy of the cutting is lower than the required value. The jet in the slit cannot quickly blow away the molten cutting melt immediately to form a large amount of trailing drag. decline.

C. When the cutting speed is too low, because the cutting place is the anode of the plasma arc, in order to maintain the stability of the arc itself, the CNC spot must inevitably find the conduction current near the slit nearest the arc, and will The radial direction of the jet transfers more heat, so that the incision is widened. The molten material on both sides of the incision gathers and solidifies at the bottom edge, forming a slag that is not easy to clean, and the upper edge of the incision is heated and melted to form a rounded corner.

D. When the speed is extremely low, the arc will even extinguish due to the incision being too wide. This shows that good cutting quality and cutting speed are inseparable.

B. As the cutting current increases, the diameter of the arc increases, and the arc becomes thicker, making the cut wider.

When choosing a power supply before plasma cutting, you cannot choose a power supply that is too large or too small. For a power supply that is too large, it is a waste to consider the cost of cutting, because such a large current cannot be used at all. Also, because of the saving of cutting cost budget, when selecting the plasma power supply, the current selection is too small, so that it can not meet its own cutting requirements during actual cutting, which is a great harm to the CNC cutting machine itself. Gabortech reminds you to choose the cutting current and the corresponding nozzle according to the thickness of the material.

Nozzle height refers to the distance between the nozzle end face and the cutting surface, which constitutes a part of the entire arc length. Plasma arc cutting generally uses a constant current or steep drop external power supply. After the nozzle height is increased, the current changes little, but it will increase the arc length and cause the arc voltage to increase, thereby increasing the arc power; but at the same time As the arc length exposed to the environment grows, the energy lost by the arc column increases.

In the case of the combined effect of the two factors, the former's role is often completely cancelled by the latter, but the effective cutting energy will be reduced, resulting in a reduction in cutting capacity. It usually shows that the blowing force of the cutting jet is weakened, the residual slag at the lower part of the incision is increased, and the upper edge is over-melted to produce rounded corners. In addition, considering the shape of the plasma jet, the diameter of the jet expands outwards after leaving the torch mouth, and an increase in the height of the nozzle inevitably causes an increase in the width of the cut. Therefore, it is beneficial to improve the cutting speed and cutting quality by selecting the nozzle height as small as possible. However, when the nozzle height is too low, it may cause double arc phenomenon. Using the ceramic outer nozzle can set the nozzle height to zero, that is, the end face of the nozzle directly contacts the surface to be cut, and a good effect can be obtained.

In order to obtain a highly compressive plasma arc cutting arc, the cutting nozzle uses a smaller nozzle aperture, a longer hole length and strengthens the cooling effect, which can increase the current passing through the nozzle effective cross section, that is, the power density of the arc Increase. But at the same time, compression also increases the power loss of the arc. Therefore, the actual effective energy used for cutting is smaller than the power output by the power supply. The loss rate is generally between 25% and 50%. Some methods such as water compression plasma arc cutting The energy loss rate will be greater, this issue should be considered when performing cutting process parameter design or economic calculation of cutting costs.

The thickness of metal plates used in industry is mostly below 50mm. Cutting with conventional plasma arcs within this thickness range often results in large and small cuts, and the upper edge of the cut will also cause a decrease in the accuracy of the cut size and Increase the amount of subsequent processing. When using oxygen and nitrogen plasma arc to cut carbon steel, aluminum and stainless steel, when the thickness of the plate is in the range of 10 ~ 25mm, usually the thicker the material, the better the perpendicularity of the end edge, and the angle error of the cutting edge is 1 Degree ~ 4 degrees. When the plate thickness is less than 1mm, as the plate thickness decreases, the incision angle error increases from 3 ° ~ 4 ° to 15 ° ~ 25 °.

It is generally believed that the cause of this phenomenon is due to the imbalance of the heat input of the plasma jet on the cut surface, that is, the energy of the plasma arc is released more in the upper part of the cut than in the lower part. This imbalance of energy release is closely related to many process parameters, such as the degree of plasma arc compression, cutting speed, and the distance between the nozzle and the workpiece. Increasing the compression of the arc can extend the high-temperature plasma jet to form a more uniform high-temperature area, and at the same time increase the velocity of the jet, which can reduce the width difference between the upper and lower cuts. However, excessive compression of conventional nozzles often results in double arcing, which not only consumes electrodes and nozzles, making the process impossible, but also leads to a decrease in the quality of the cut. In addition, excessively high speed and excessively high nozzle height will increase the difference between the upper and lower widths of the cut. 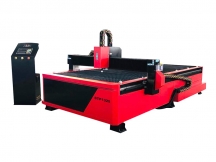 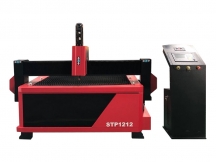 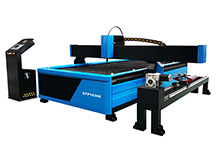 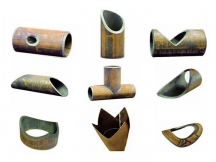 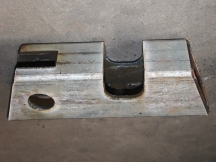 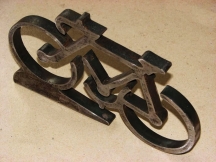 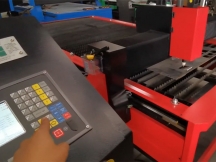 How to Use CNC Plasma Cutter for Sheet Metal Fabrication? 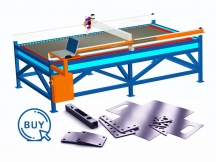 A Guide to Buy Your First CNC Plasma Cutting Machine 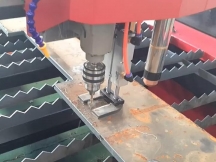