When you have an idea to buy a CNC router machine, how many axis do you need for the CNC router kit? It's a common problem for every CNC router buyer, so, let's start to make a comparison of 3 axis, 4 axis and 5 axis CNC routers.

A, B or C axis is corresponding to the rotation axis of X, Y, Z. 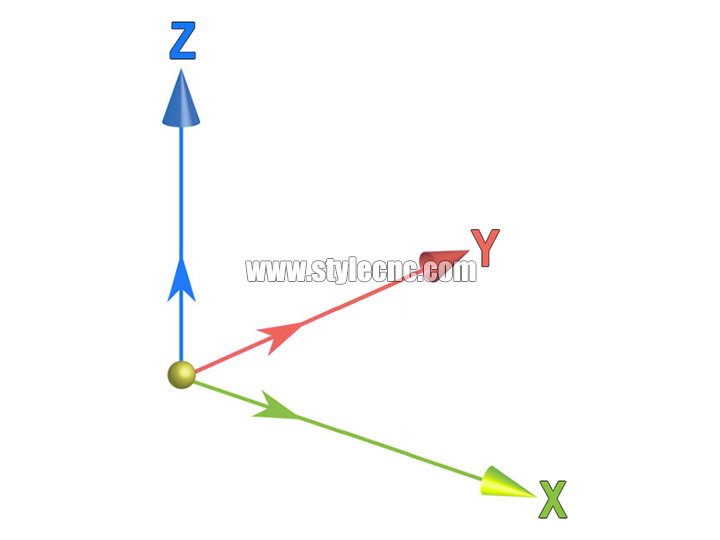 These specific CNC routers can go along three different axis at the same time.

Y-axis: front to back

Z-axis: up and down

3 axis CNC router machines moving three axis at the same time; the X-axis, the Y-axis, and the Z-axis. Cutting along the X-axis moves the router bit from left to right, cutting along the Y-axis moves it from front to back, and cutting across the Z-axis moves it up and down. These machines are used primarily for cutting flat, 2D and 2.5D parts. Whether it is flat carving or round carving, you can think of it as flat carving, it is calculated according to the pulse. 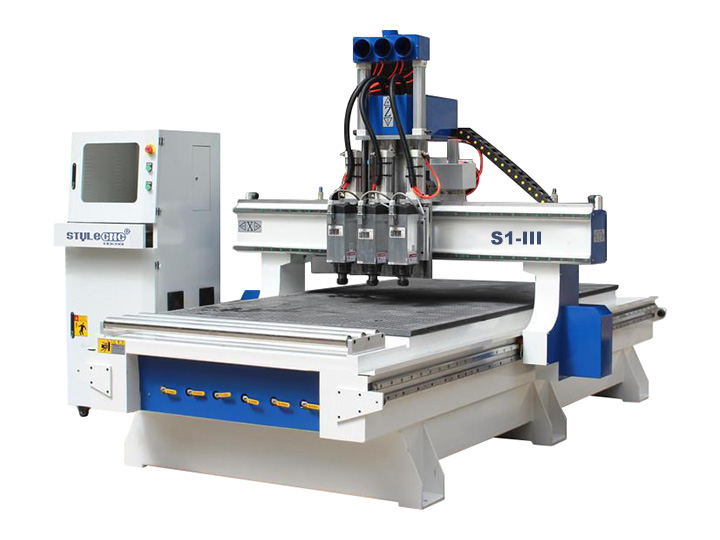 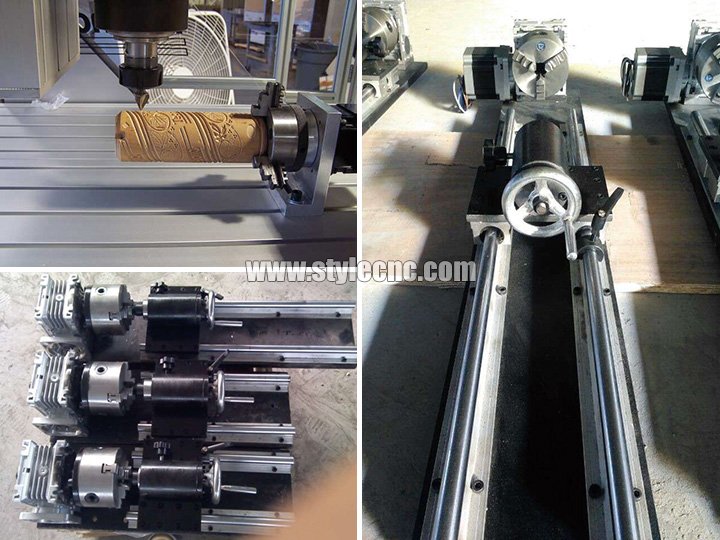 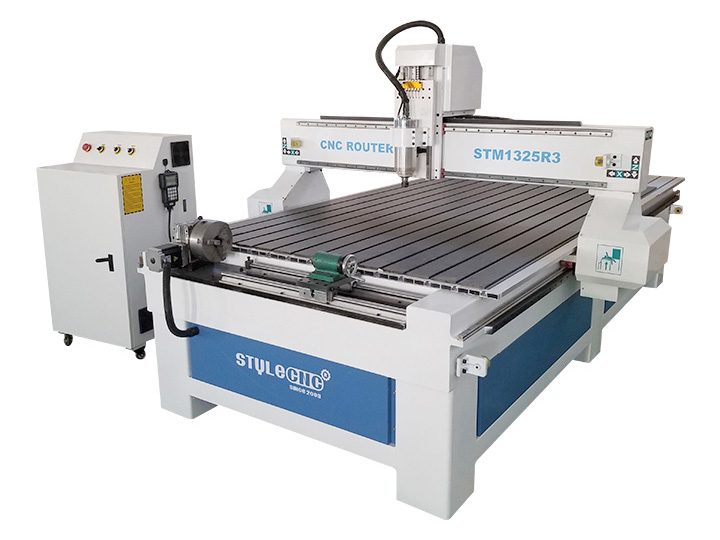 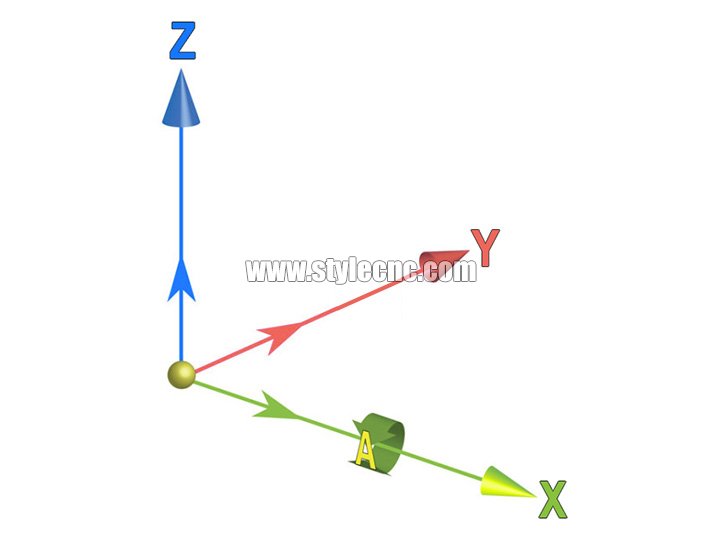 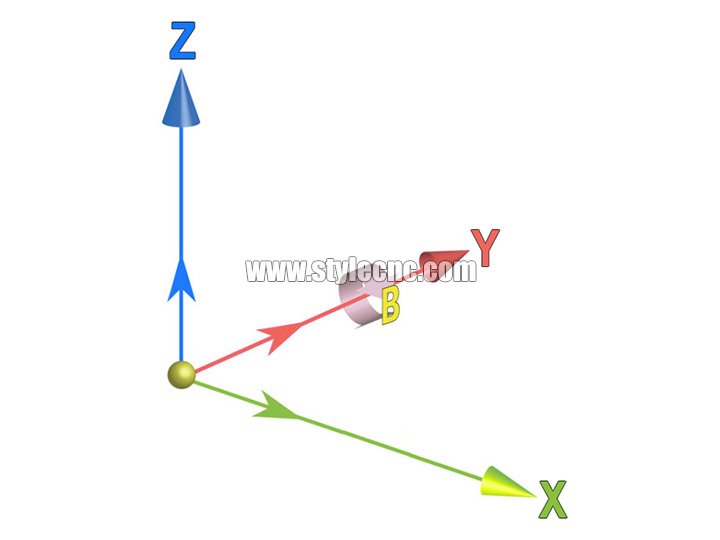 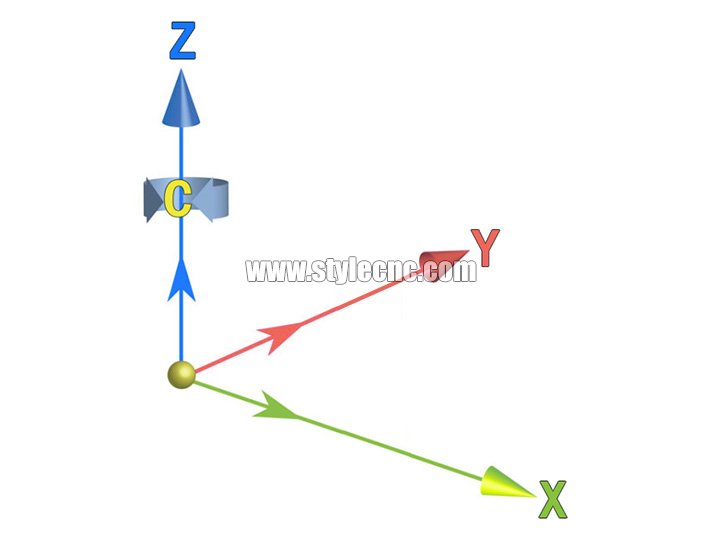 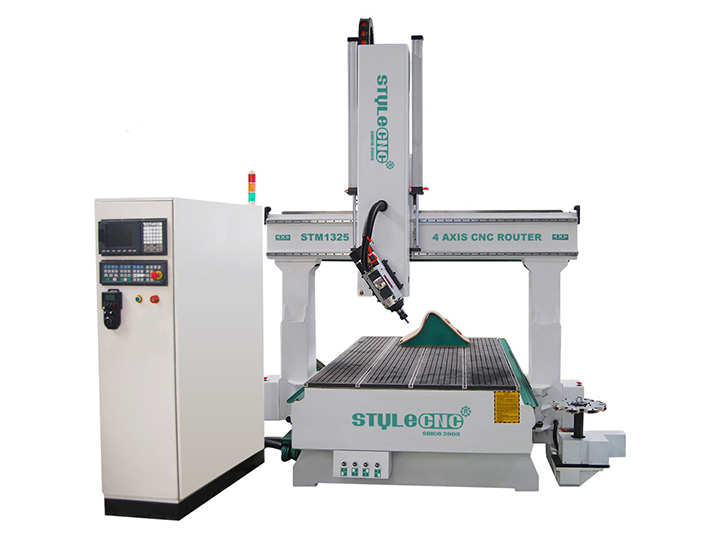 4th axis 3D machining means that the machine can perform 3D rotary carving or cutting, but one of the three axes X, Y, and Z is converted to the A axis for routing. We explain the difference between these two types of 3D CNC machines from different angles:

1. Conceptually, the difference between 4 axis and 4th axis is whether the four-axis linkage of X, Y, Z, and A can be executed at the same time.

4. According to the routing effect, the four-axis has more processing than the 4th-axis, the processing is more uniform, the dead angle is smaller, and the appearance is more beautiful.

5. Different from the direction of the machine tool. The direction the four-axis tooltip points to can be changed at any time. The tool tip of the 4th axis always points to the center of the workpiece. The four axis is more advanced and more reliable than the 4th axis. 4 axis is the development trend of 3D CNC router machines. The important thing is that more than 60% of the 3D CNC router machines on the market are 4th axis. When choosing a four-axis 3D CNC machine, it is necessary not only to distinguish between 4 axis and 4th axis, but also to analyze its own machining conditions, such as the size, weight, hardness, and machining methods of the workpiece. 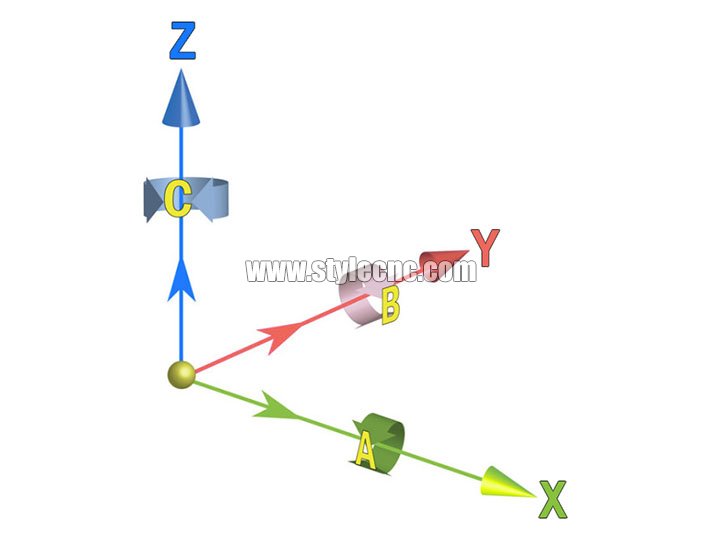 These routers are somewhat like the 3, 4 axis CNC machine kit, but they have two additional axis they can move along. These additional axis allow for shorter project time due to their capability of cutting five edges of the material simultaneously. However, due to the fact that these machines have a longer X-axis, it makes for less stability and accuracy-potentially requiring more of your attention than a 3, 4 axis CNC router kit.

The 5 axis CNC machining center has the characteristics of high efficiency and high precision, and the pentahedron can be processed in one clamping of the workpiece. If equipped with a five-axis linkage high-end numerical control system, it can also perform high-precision processing of complex spatial surfaces, and is more suitable for processing modern molds such as auto parts and aircraft structural parts. There are two ways for the rotary axis of the five-axis vertical machining center. One is the table rotary axis. The table set on the bed can rotate around the X axis, which is defined as the A axis. The general working range of the A axis is +30 degrees to- 120 degrees. There is also a rotary table in the middle of the worktable, which rotates around the Z axis at the position shown in the figure, which is defined as the C axis, and the C axis rotates 360 degrees. In this way, through the combination of A-axis and C-axis, except for the five-axis machining center on the bottom surface of the workpiece fixed on the worktable, the other five surfaces can be processed by the vertical spindle. The minimum graduation value of A-axis and C-axis is generally 0.001 degrees, so that the workpiece can be subdivided into any angle, and inclined surfaces, inclined holes, etc. can be processed. If the A-axis and C-axis are linked with the X, Y, Z three linear axes, complex spatial surfaces can be processed. Of course, this requires the support of high-end CNC systems, servo systems and software. The advantage of this arrangement is that the structure of the spindle is relatively simple, the rigidity of the spindle is very good, and the manufacturing cost is relatively low. However, the general worktable cannot be designed to be too large, and the load-bearing capacity is also small, especially when the A-axis rotation is greater than or equal to 90 degrees, the workpiece will bring a large load-bearing moment to the worktable when cutting. The other is to rely on the rotation of the vertical spindle head. The front end of the main shaft is a revolving head, which can circle the Z axis 360 degrees to become the C axis. The revolving head also has an A axis that can rotate around the X axis, which can generally reach more than ±90 degrees to achieve the same function as above. The advantage of this setting method is that the spindle processing is very flexible, the worktable can also be designed to be very large, and the huge fuselage and huge engine shell of the passenger aircraft can be processed on this type of machining center. This design also has a big advantage: when we use spherical milling cutters to process curved surfaces, when the center line of the tool is perpendicular to the machined surface, since the linear velocity of the apex of the spherical milling cutter is zero, the surface quality of the workpiece cut by the apex will be poor. The design of the spindle rotation is adopted to make the spindle rotate an angle relative to the workpiece, so that the spherical milling cutter avoids the apex cutting, guarantees a certain linear speed, and improves the surface processing quality. This structure is very popular for high-precision surface machining of molds, which is difficult for rotary table machining centers to achieve. In order to achieve the high precision of rotation, the high-end rotary axis is also equipped with circular grating feedback, and the indexing accuracy is within a few seconds. Of course, the rotation structure of this type of spindle is more complicated and the manufacturing cost is also high.

For the pseudo five-axis double turntable, multiple coordinates need to be set to achieve the purpose of index processing. However, if it is a five-axis swing head, the indexing processing cannot be completed, because the five-axis swing head is not a single Z motion when processing downwards, but Z moves with X or Y together. At this time, the fake five-axis programming will be very troublesome and the debugging will be more difficult, and the three-axis offset function cannot be used at this time. 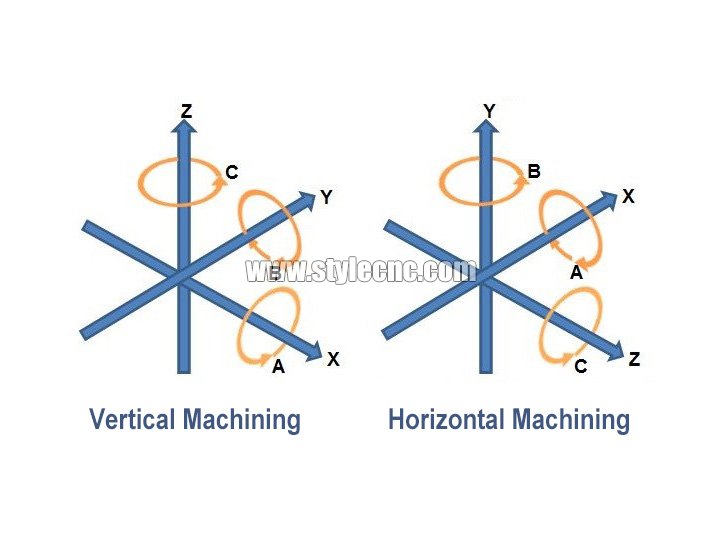 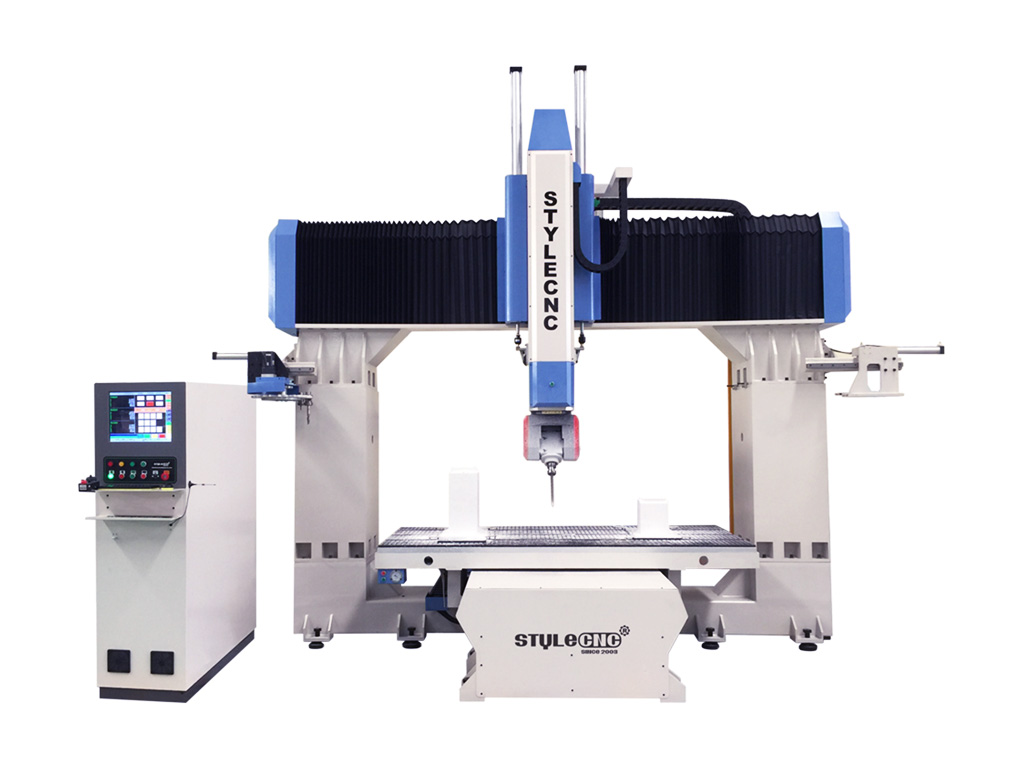 Which CNC Router Machine Is Ideal For You?

While these routers seem somewhat straight forward with what they can accomplish, they are very delicate and advanced pieces of technology. If you are looking to get more creative with your designs, it is recommended you invest in a 4 axis or 5 axis CNC router kit, but 3 axis or 4th axis CNC router kits are often more affordable.

Now that you have a working knowledge of how a router works you can better understand the differences between various models.

5 axis CNC machines can cut along two additional axis than 3 axis CNC machines. These routers have the ability to cut on five sides of a piece of material simultaneously, which expands the operator’s capabilities and flexibility. Unlike their 3 axis counterparts, these machines are usually used to cut large 3D parts. In addition, 5 axis CNC machines have a taller gantry and longer X-axis, which allows them to cut larger part; however, this comes at a serious cost; the taller the gantry and the longer the X-axis, the less the accurate and stable these machines are. For proper quality control, the height of the gantry and the length of the X-axis should be limited as much as possible.

Although routers seem like simple machines, they are highly sophisticated pieces of technology that require a certain level of expertise to operate. 5 axis CNC machines tend to be more expensive than traditional 3 axis types, but ultimately offer greater flexibility and enable users to be more creative with their designs.

How Many Axis Do You Need?

You may have seen references to CNC routers offering seven, nine or even eleven axis. Although that many additional axis may seem difficult to envision, the explanation for such staggering geometries is actually quite simple.

When you’re dealing with machines that have, you may say, more than one turning spindle, then you already have more axis.

For example, we have machines with second spindles and lower turrets. On those machines, you’ll have several axis: the top turret is going to have 4 axis and the lower turret has 2, then you have opposing spindles that have 2 axis as well. Those machines can have up to 9.

A component, like an aerospace valve might be done on a 5 axis CNC machine. Or we could do that part on a multi-axis CNC router that has a rotary B-axis and twin spindles for two C-axis, plus X, Y and Z. There's also a lower turret that gives you a second X and Z. So it gives you more axis, but the part itself is the same geometry.

So how many axis do you need for your business?

As is often the case in manufacturing, the answer to that question hinges on your particular application. Have a look of the following example:

A turbine blade is a freeform surface and can be rather complex. The most efficient way to finish machine a blade like that is to use 5 axis, taking the tool in a spiral around the airfoil of the blade. You can use a 3 axis to machine if you index the blade to a position and then use three linear axis to surface machine it, but that’s typically not the most efficient way.

The geometry of the part will tell you if you need a 3, 4 or 5 axis configuration.

However, it’s important to remember that the number of axis you need depends on more than just one part. The part will dictate a lot of it, but then there’s also what the shop wants to accomplish.

A customer might bring me a part, say a titanium aerospace bracket, and I might say, That's a perfect part for a 5 axis CNC router table, but they might be planning on making parts that would work better on one of our machines. That multi-function machine might not be optimized the same way a 5 axis CNC machine is, but it may give the customer opportunities for doing lathe, shaft or chucker work that's part of their long-term plan.

Another thing to consider is the work envelope, What's the maximum size part that you can put in the machine and still perform tool changes and part transfers? It's understanding the CNC machine's capabilities and what it can and can't do. 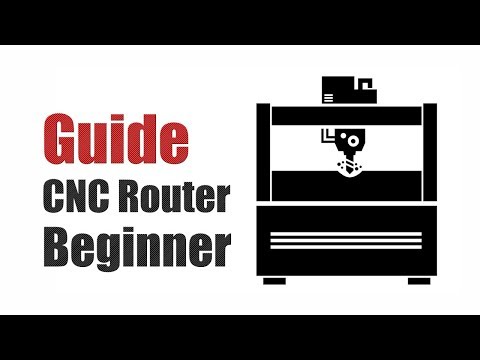