The most common linear guide rails include square guide rails (profile guide rails) and round guide rails. We will make a comparison between them and help you to choose the right CNC linear rail kit to DIY or build your CNC router machine. 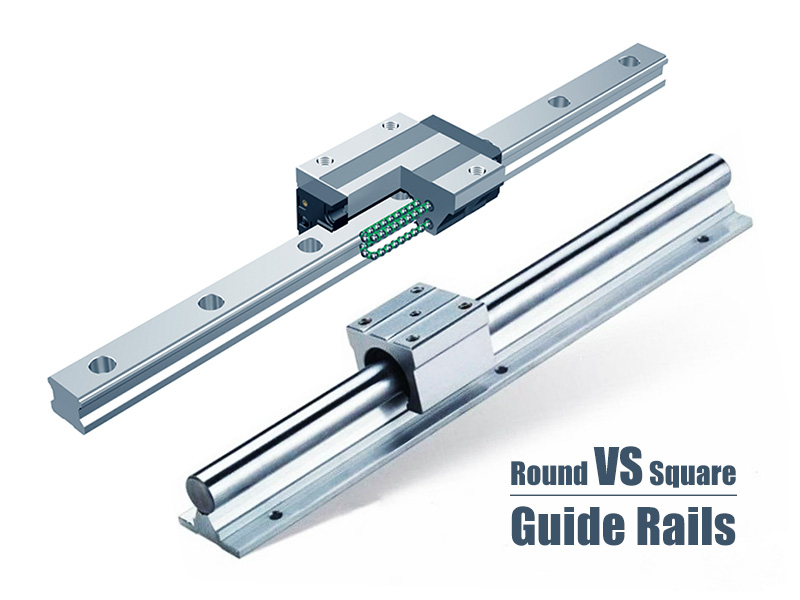 Linear guide rails (CNC linear rail kit) come in two types, round guide rails and square guide rails. Round guide rails originated first but do not provide the precision offered by square guide rail components. However, the round guide rail is the preferred guide rail for vertical movements with heavy loads. The application will dictate which type of linear guide rails should be used. The criteria for choosing one over the other is no different than choosing any other CNC router component, spec out the design, define system objectives, and work from past successes and mistakes. But anyone short on experience can make simple mistakes. The best place to start is learning the fundamental qualities of each type and adopting those most relevant to the application.

Round guide rail technology has been honed to near perfection over the past 60 years and square guide rails have been around a respectable 35. Most of the inherent design problems have long been ironed out and materials have improved dramatically. Most problems arise from misuse and misapplication. And the main reasons for misapplication often come from a personal bias or prejudice, a miscalculation, or an esthetic judgment. That is, a relatively small linear profile rail might fit the load, speed, and every other requirement-just fine. But when mounted to the CNC router, a discerning eye might conclude it looks feeble and definitely undersized.

One type of linear ball-bushing guide is not necessarily easier to use than another. The choice depends entirely on the specific application. In general, a particular square-rail component might cost more than the round, but other requirements including system cost should be addressed. At a minimum, these items include the expenses for preparing the CNC router bed or other mounting surface to accommodate the rail system, the positioning accuracy needed, and the space available for the linear-rail subsystem.

But before committing pencil to paper or mouse to pad, decide upon either a square or round rail. When the application looks like it could go either way, run preliminary calculations on the most critical qualities and needs to make certain nothing is overlooked. 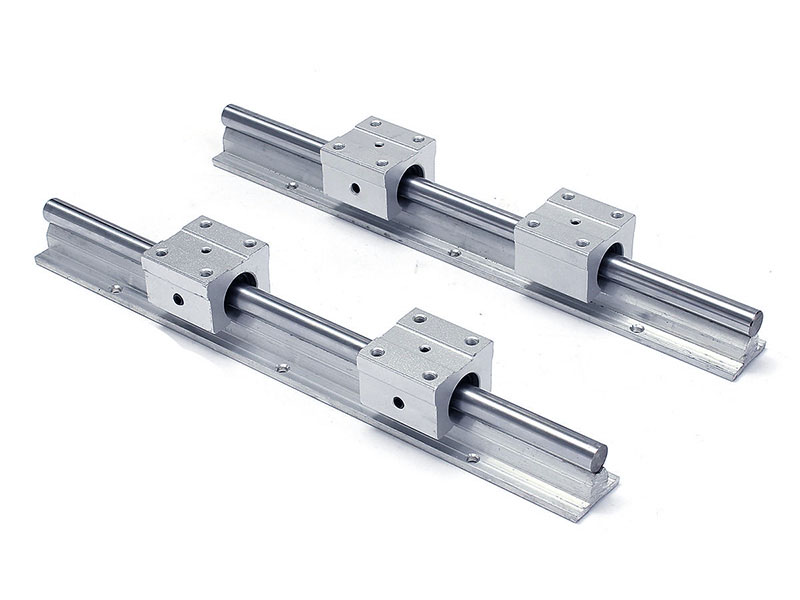 This didn't make Round guide rails less valuable or obsolete. Their benefits continue to outweigh their drawbacks. Round guide rails are generally less expensive than Square guide rails, but that should not be the primary criterion for any application. A square rail can actually fail where a round rail can work smoothly and flawlessly. For example, Round guide rails are more forgiving of misalignment, poor parallelism, and moment loads in most CNC machines and allow more variation in rail height than square-rail systems. Still, they can hold a travel straightness of 0.01-in. for 10 ft. Also, the small rolling element tends to make the round-rail motion smoother.

To attain this accuracy, they need supports only at the ends, although many are supported at several points or along their full length. This lets the rails cross over gaps without a problem, and safely go from one support to another. When the round-rail system requires only a shaft-rail assembly (a shaft, a rail, or a shaft and two end-supported blocks with four pillow blocks) the preparation cost is less than the square rail. Generally, round-rail installation is relatively easy and inexpensive. And service and replacement favors the round rail. 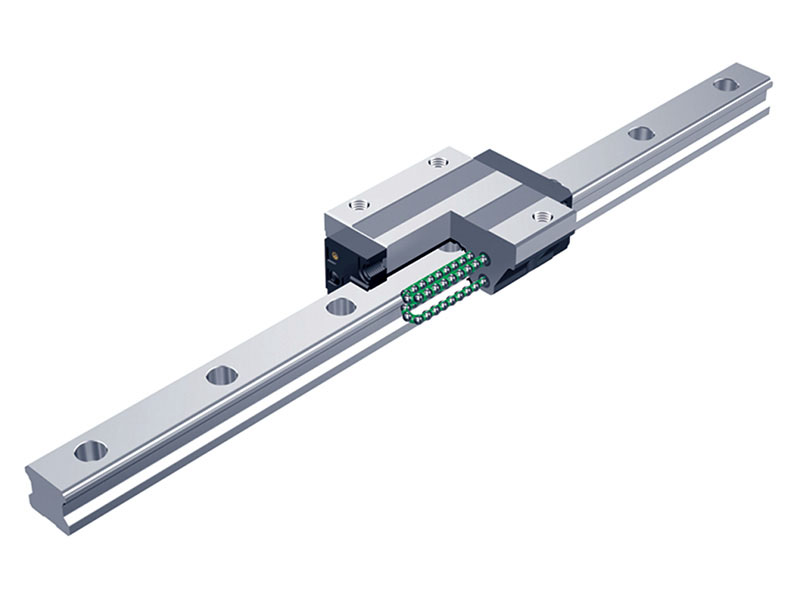 Square guide rails are stiffer and more rigid, but need straight, continuous support with tight requirements for flatness and parallelism; they can't span the gaps that a round rail can. But because CNC router manufacturers are accustomed to precision bed preparation, this isn't a problem.

The main advantage of Square guide rails is their high positioning accuracy, especially useful in milling and grinding. They hold from 0.0002 to 0.001 in. over a length of 10 ft, compared to 0.01 in. for Round guide rails. They also handle this precision for a moment load; a single carriage and single rail is better suited for this than a round rail. And because the square rail handles higher loads at high accuracy, most users tolerate somewhat less smoothness than the Round guide rails offer.

Although a single profile rail unit can handle a moment load, it's not always recommended. Two or more units should be used to balance the load or distribute the weight. However, one square rail can fit where two Round guide rails would be required. Profile rails are also easier to use because they need one or two parts for a complete system, the rail and the carriage, whereas the round rail comprises a few more parts.

Square guide rails have higher load-life capacity, defined as the amount of load the unit survives traveling a specified distance. For example, a 20,000-N capacity is based on a 100-km rating. And wear is minimal because the rail doesn't slide but has rolling contact. Square-rail life primarily depends on the type of environment in which it resides, proper lubrication, and maintenance. With all else being equal, Round guide rails are a little more tolerant because they are not as tight a package and not as sensitive to slight variations. A square rail is more sensitive to debris and impact, although it does have a higher capacity and resistance to impacts which don't affect the rolling element.

Considering the wear aspect, the round rail also has natural debris-shedding capabilities. Square-rail tracks are hidden from direct access but do not necessarily shed debris. With a fluid driving force applied to the rail, a round rail performs better than a square rail, because the square rail could pull up on some of the race areas, whereas the round rail has fewer tendencies for pull-up.

Select a type of rail to use before starting the CNC router component layout. The mounting fixtures are radically different between round and Square guide rails, and the area in which to work varies as does the load rating for the physical size. If it doesn't work out later, changing from one brand of square rail to another is easier than changing from a square to round rail. All manufacturers follow standards that allow some degree of interchangeability within a type.

Efficiency can be approached from two angles. One deals with the drag coefficient of friction; less friction means lower input energy. Round-rail drag is a little lower and its action smoother than a profile rail. But those who use Square guide rails regularly provide enough power to drive the rails sufficiently well. Some also consider efficiency from the standpoint of overall envelope or size. The smaller profile rail offers a smaller package for higher loads.

Shock loading, as with an instantaneous impact load, affects all bearings. Square guide rails can handle a heavier load than a small unit, so shock is more of an impact force. But in all cases, the rail is scaled to the capacity of the normal load, not a shock load. There is no significant difference except that in heavy machinery a shock is more detrimental just because of the pure mass.

Square guide rails come with some critical environmental deratings, typically found in the manufacturer's handbook or design guide. Unfortunately, designersdon't consider derating factors frequently enough in the beginning design stages for either round or Square guide rails. For example, the standard duty-cycle rating in the U.S. is 2 million in. or 50 km and 100 km or 4 million in. for the European market. Often, the standards recommend that a rail system not be used beyond either 25 or 50% of the rated capacity.

It's in the catalog

Most catalogs for linear roller and ball guides contain application and engineering information for sizing and installation. These parameters are required for determining the dynamic load and moment ratings and the static load and moment capacities, which include pitch, roll, and yaw. Catalogs also include graphs and equations for determining bearing travel life from the dynamic load rating and applied dynamic load input parameters. Each linear roller or ball bearing guide has unique specifications for velocity, acceleration, tolerances, preload, and temperature range.

Round linear ball bushing bearings require the same considerations as profile rails, plus a few. Polar graphs illustrate the dynamic load capacity, and graphs show the load life. The low friction coefficient of 0.001 and self-aligning specifications given to Round guide rails eliminate the need for the derating factors commonly assigned to profile rails. 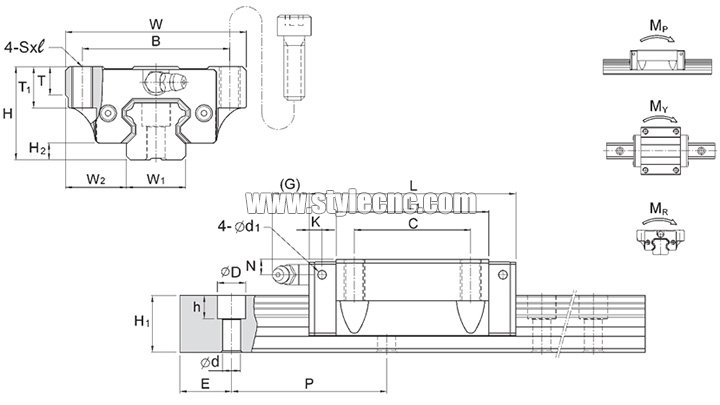 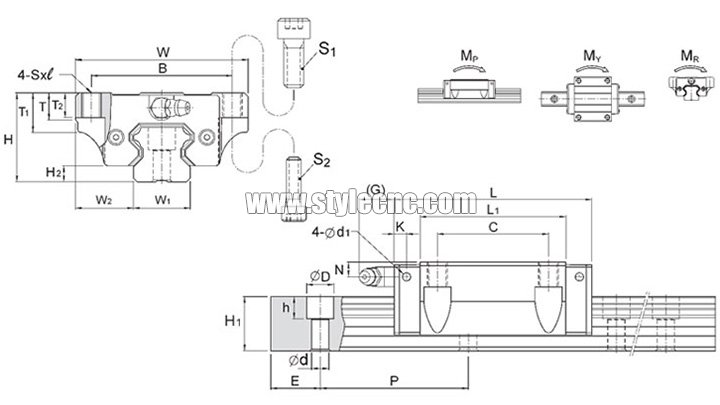 Most applications can use either round or Square guide rails. But some rails are replaced with the other type because the former doesn't work. Such was the case in a hospital-patient bed where the designer started with a square rail for axial movement. But the assembly would bind; it couldn't move freely unless the mounting bolts were loosened to allow some twisting motion. The bed frame simply was not rigid enough. The square rail had to be replaced with the self-aligning round rail.

Another application suffering from a similar problem was a square rail mounted to a sheet-metal base in a vending machine. The rail didn't work because the sheet-metal mounting was not rigid enough. Sometimes, designers repeat mistakes when they look at the same problem in a different light. An engineer familiar with Round guide rails may tend to stick with them, regardless of the application needs for higher accuracy. But most applications don't need the square-rail accuracy. They should look at the entire system cost, not just the component cost. And that means incorporating the requirements for all the peripherals and extended issues.

The load/life graph of the round rail indicates the limiting load for a given ball-bushing bearing. Enter the chart with the maximum load of the most heavily loaded bearing and the required travel life and find where the two lines intersect. The area through or above and to the right of the intersection indicates the most suitable bearings.

Square guide rails are required to have extremely parallel surfaces to prevent binding and excessive wear. They tend to take on the shape of the mounting surface, making strict adherence to the parallelism specifications necessary.

License: The text of "Round Guide Rails VS Square Guide Rails for CNC Routers" by STYLECNC is licensed under a Creative Commons Attribution 4.0 International License.
Original Source: https://www.stylecnc.com/user-manual/round-square-guide-rails-cnc-routers.html