A Guide To Stepper Motor VS Servo Motor

What Are The Differences Between Stepper Motors And Servo Motors?

Servo motors and stepper motors are the two most common motor drives in the industrial control field, what are the differences between them, we will pick up an ultimate guide to stepper motor vs servo motor.

Servo motors are used as actuators in the control system to convert the received electrical signals into angular displacement or angular velocity output on the motor shaft. The rotor inside the servo motor is a permanent magnet. The U/V/W three-phase electricity controlled by the driver forms an electromagnetic field. The rotor rotates under the action of this magnetic field. At the same time, the encoder of the motor feeds back the signal to the driver, and the driver compares the target with the feedback value. The values are compared, and the angle of rotation of the rotor is adjusted. 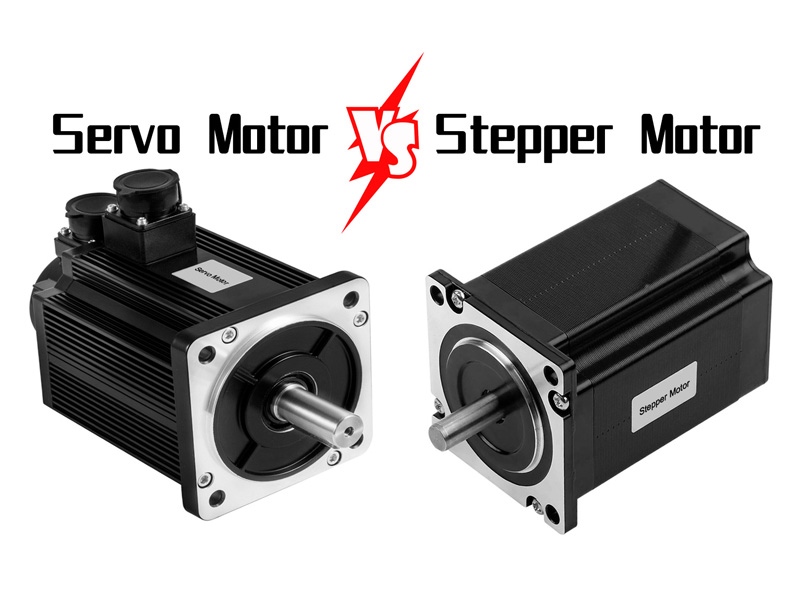 Stepper motor is an open-loop control element stepper motor device that converts electrical pulse signals into angular displacement or linear displacement. In the case of non-overload, the motor speed and stop position only depend on the frequency of the pulse signal and the number of pulses, and not affected by load changes.

When the stepper driver receives a pulse signal, it drives the stepper motor to rotate a fixed angle in the set direction, which is called the "step angle". Stepping can control the angular displacement by controlling the number of pulses, so as to achieve the purpose of accurate positioning. It can also control the speed and acceleration of the motor rotation by controlling the pulse frequency of the driver, so as to achieve the purpose of high speed. Therefore, the stepper motor is open-loop control.

The Difference Between Stepper Motors And Servo Motors

A servo motor controller is a controller used to control a servo motor. Its function is similar to that of a frequency converter acting on an ordinary AC motor. It is a part of the servo system and is mainly used in high-precision positioning systems. Generally, the servo motor is controlled through three ways of position, speed and torque to achieve high-precision transmission system positioning. It is currently a high-end product of transmission technology.

The more phases and beats of the stepper motor, the higher its accuracy. The servo motor is based on the built-in encoder. The more scale the encoder has, the higher the accuracy.

Stepper motors are prone to low-frequency vibration at low speeds. Generally, damping or subdivision technology is used to overcome low-frequency vibrations, while servo motors will not vibrate at low speeds. The AC servo system has a resonance suppression function, which can cover the lack of rigidity of the machine, and the system has a frequency analysis function (FFT) inside the system, which can detect the resonance point of the machine to facilitate system adjustment.

The output torque of the stepper motor will decrease with the increase of the speed, and the AC servo motor has a constant torque output.

The stepper motor adopts open-loop control. If the starting frequency is too high or the load is too large, it is easy to lose steps or stall. When the speed is too high, it is easy to overshoot. The servo system is closed-loop control. The drive can directly sample the feedback signal of the motor encoder. The position loop and the speed loop are formed inside. Generally, there will be no step loss or overshoot of the stepper motor, and the control performance is more reliable.

It takes hundreds of milliseconds for a stepper motor to accelerate from a standstill to a working speed, while the AC servo system has better acceleration performance, generally only a few milliseconds, and can be used in control situations that require fast start and stop.

AC servo system is superior to stepper motor in many performance aspects. However, stepper motors are often used as executive motors in some less demanding occasions. Therefore, in the design process of the control system, various factors such as control requirements and cost should be considered comprehensively, and a suitable control motor should be selected.